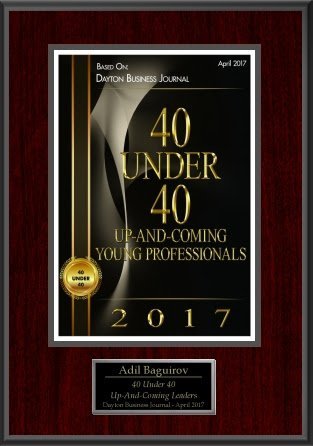 Adil Baguirov has certainly accomplished a lot before the age of 40. Not only is he the president and member of the Dayton Board of Education and the owner of his own small business that is a premier logistics company in North Dayton, Adil Baguirov is also a commercial real estate investor, author of several academic books and articles, as well as a speaker, lecturer, and moderator at academic conferences, university-level classes, and think tanks.

On top of wearing all of these different hats, Adil Baguirov also considers himself to be a technology junkie. He has used his passion for technology in many ways to help drive his goal of building a more prosperous future for his community and our nation.

Adil Baguirov is joined by more than 200 young people from around the Miami Valley area that were also nominated in 2017. The members of the Dayton Business Journal Forty Under 40 list come from a wide array of industries. The majority of them are in their 30s but there are also several members that are in their 20s. The list is comprised of small business owners, lawyers, educators, CEOs, engineers, bankers, military members, and more.

The 2017 list was selected by judges who have all been named to the same list in the past. The judges who selected Adil Baguirov for the list were executive director of the City of Dayton Human Relations Council, Catherine Crosby; the president of Russell & Company, Robert Russell; and the executive vice president of Regional Development at the Dayton Development Coalition, Julie Sullivan.

Adil Baguirov received a plaque to represent this honor at an awards banquet in May at the Sinclair Community College in downtown Dayton.